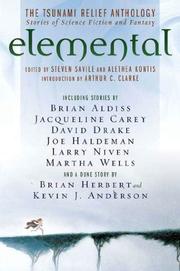 Stories of Science Fiction and Fantasy

Anthology of speculative fiction, with proceeds going to Save the Children’s Tsunami Relief Fund.

Themes vary a great deal in these 23 stories, which range from faerie fantasy to military SF, and there is hardly a letdown in the bunch. David Gerrold starts it all off with one of the best entries, “Report from the Near Future: Crystallization,” which revolves around the collapse of the L.A. traffic system. Adam Roberts follows with “And Tomorrow and,” a darkly comic retelling of Macbeth that includes some extrapolations into the murderous Scot’s future. Jacqueline Carey’s haunting and lyrical “In the Matter of Fallen Angels” explores the extraordinary through the eyes of the ordinary. In “Tough Love 3001,” Juliet Marillier takes a humorous look at writing workshops—and alien interactions. Sharon Shinn’s “The Double Edged Sword” is an evocative and beautifully written fantasy about an exiled healer who must face her past. “The Potter’s Daughter,” an Ile-Rien prequel from Martha Wells, shows half-faerie girl Kade confronting a sorcerer and her half-breed heritage. Overall, the rising stars outshine the superstars. Larry Niven and Joe Haldeman offer enjoyable minor fare, while SFWA Grand Master Brian Aldiss presents a nicely written but slight tale of tigers. Brian Herbert and Kevin J. Anderson deliver yet another “Dune” story, sure to be incomprehensible to those who haven’t read the whole saga. In between these extremes are several above-average tales, including a “Legion of the Damned” story from William C. Dietz, an immortality tale from Syne Mitchell and a fantasy by Lynn Flewelling.

Devoted to a good cause, with more hits than misses.