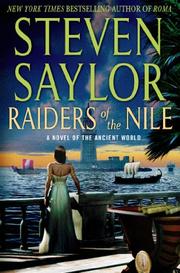 RAIDERS OF THE NILE

Saylor’s (The Seven Wonders, 2012, etc.) latest historical adventure chronicles young Gordianus’ adventures as he gets trapped in a scheme to loot Alexander the Great’s sarcophagus.

Son of the famous Gordianus the Finder, young Gordianus has traveled to Alexandria, Egypt, in 88 B.C. There, he too works as a finder, adding a few coins to his purse, but his treasure is Bethesda, a beautiful slave he’s taken into his bed—and his heart. Celebrating Gordianus’ 22nd birthday, the couple watches a street-mime troupe. One of the performers is beautiful Axiothea, who looks so much like Bethesda she could be her twin. After the ribald performance is broken up by King Ptolemy’s troopers, Bethesda disappears. Gordianus learns she’s been mistaken for Axiothea, who’s thought to be the mistress of wealthy merchant Trafhapy. Bethesda’s being held for ransom in the Nile delta by a thief known as the Cuckoo’s Child, and therein the plot: Gordianus treks into the wilderness looking for Bethesda, accompanied by opportunistic Djet, Trafhapy's slave boy. The pair finds the Cuckoo's Nest—think Butch Cassidy's Hole-in-the-Wall—but the quest is made even more dangerous by the fact that the Cuckoo's Child, Artemon, has fallen in love with Bethesda. Then Gordianus finds himself tangled in Artemon's scheme to loot Alexander’s tomb, part of a wider conspiracy involving Ptolemy's brother Soter. Saylor’s action runs nonstop, from political unrest to murders at a rural inn to a mob seeking to kill Gordianus to a pirate raid on Alexandria. Gordianus leaps from the pages as a modern trope—a wisecracking, good-hearted charmer—and Saylor frames him against an entrancing interpretation of ancient Egypt, from slaves, sun, mosquitoes, brothels and markets to derring-do swordplay, the Pharos Lighthouse and the vibrant streets of the fabled city.

Fans of James Lee Burke or Lee Child will enjoy a two-millennium time shift to tour the dark corners of ancient Egypt.