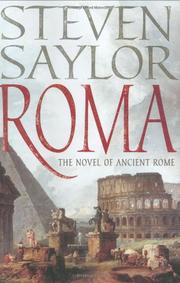 Livy meets Michener in this sprawling, episodic 1,000-year novel of the rise of ancient Rome from its first settlement to the assassination of Julius Caesar.

How to give a millennium of Roman history the coherence of a fictional epic? Saylor uses three devices to shape his story. He chooses his 11 focal points selectively, sometimes leaping hundreds of years between chapters. He focuses on the shifting fortunes of the families descended from two cousins, Potitia and Pinarius, and he traces the descent of a fascinum, a gold amulet in the shape of a winged penis, as it’s passed down from generation to generation of the often warring families. The results are decidedly mixed. Although his discontinuous story requires repeated infusions of arid exposition at the beginning of each chapter, Saylor’s gift for dramatic narrative brings alive familiar tales from Roman history: the establishment of the city by the twins Romulus and Remus, Hercules’ defeat of the monstrous Cacus, Tarquin’s rape of Lucretia, the rise and fall of Coriolanus, Verginius’ sacrifice of his defiled daughter, the sacred geese that raise the cry against an invasion by the Gauls, the campaign against Hannibal and Carthage. Although he freely embroiders on historical events in order to make room for the Potitii and the Pinarii, he makes many of their encounters with historical figures touching and compelling, particularly in the first half of the story, which finds both families dwindling to virtual extinction. After the Gallic siege of the Capitoline, however, Saylor’s resurgent heroes increasingly come to seem like onlookers and spear-carriers to historical events more interesting than they are, and by the time of the Caesars, the clans, although they’ve merged, are clearly showing their age.

Like James Michener, Saylor the novelist (A Gladiator Dies Only Once, 2005, etc.) is upstaged by Saylor the historian—except when he suggests that history itself is fact-based fiction.