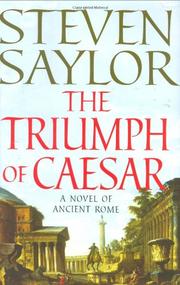 THE TRIUMPH OF CAESAR

Suspecting a plot against Julius Caesar, his wife Calpurnia calls on Gordianus the Finder to head it off.

Now that he’s resolved his Egyptian problems (The Judgment of Caesar, 2004), the Dictator of Rome has returned for four days of no-holds-barred festivals celebrating respectively his Gallic, Egyptian, Asian and African triumphs. Urged on by dire hints from her Etruscan soothsayer Porsenna and her agent Hieronymus, Calpurnia believes that someone is planning her husband’s death. Her suspicions harden into certainty when Hieronymus is slain. Since Gordianus has been so successful for so long at finding the truth, she charges him to identify the ringleader Hieronymus was frightened to name even in his private notes. Mingling among a cast that includes the most illustrious people in the world—Julius Caesar, his grandnephew Octavius, his general Marc Antony, the defeated Gallic chief Vercingetorix, the Egyptian queen Cleopatra and her captive sister Arsinoë—Gordianus swiftly realizes that virtually everyone who’s ever dealt with Caesar has sufficient grounds to wish him dead.

Gordianus doesn’t distinguish himself as a detective, and readers possessed of historical hindsight will easily eliminate most of the high-profile suspects. Still, no contemporary novelist approaches Saylor’s continued ability to bring ancient Rome to life.