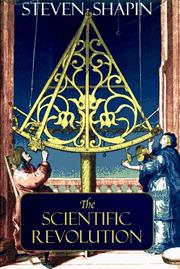 A short but dense exposition arguing that there really wasn't a dramatic shift in how scholars went about discovering truth about the world in the 17th century. In other accounts of the science of the period, differences in points of view among scientists have certainly been noted, but only Shapin has been willing to argue that there was no sudden, clear break from the past, no single revolutionary change in the scientific viewpoint. Shapin's (Sociology/Univ. of California, San Diego) point is that there were many threads making up the fabric of 17th-century thought. To be sure, there were some fundamental principles in the study of science (or, as it was then known, natural philosophy). But while there was general agreement in the turn toward an exploration of the practical (mechanical/material) causes for observed phenomena, the methods of pursuit varied greatly. For some scientists and philosophers, inductive approaches via experimental data seemed the right path; others embraced deduction via rational theorizing. For most, natural philosophy was never divorced from a belief in the divine, although here too opinions differed. The divine for some was an all-present, all-potent force; for others, the divine was the distant prime mover who set the clockwork world in motion. Shapin singles out key players like Boyle, Hooke, Bacon, and Newton in England, Galileo in Italy, and Descartes in France. He emphasizes the need to set them in their specific cultural contexts as well as to see them as heirs to the inventions and discoveries that expanded the dimensions of space and time. Because of the rise of scientific societies and the printing press, communication of ideas could also flourish, increasing the arena for debate and controversy. In this revisionist text, Shapin offers a provocative new reading of a formative period in the history of science. (30 illustrations, not seen)