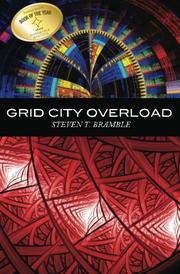 A story of near-future distress from author Bramble (Affliction Included, 2009).

The futuristic town of Grid City, Colo., is every bit as cold and melancholy as the name would imply. Full of neon corporate logos, industrial pollution and an unvaryingly unhappy population, Grid City encompasses all that people who fret about the future of American cities are worried about. Within this maze of despair are a handful of characters that range from a drug-addicted used car salesman who will latch on to anyone resembling a father figure to a stunningly sexy, evil computer expert who will latch on to anyone she can control. In alternating narratives, the novel plumbs the lives of these characters as they lose themselves in drugs and technological advances in an effort to block out all the noise around them and find out who they really are. This proves easier said than done. The people of Grid City (and presumably much of the world’s population circa 2025) are not just more interested in looking at their electronic devices than the real world, at times the gadgets assume a life of their own. In the book’s most inventive section, one particularly lonely and paranoid character manages to carry on a love affair with a cellphone. Other sections prove far less inventive as again and again, people who were born human become altered due to the constant barrage of devices and “sensory overflow.” The average reader is likely to recognize a world where even upscale, busy waiters feel the need to check their phones continually. Whether they get their highs from drugs or political corruption, there are not many characters to root for in Grid City, so the reader is left largely indifferent to their fates. Though spiced up with Pynchon-esque flourishes, these tangents add only to the already-obvious message of people drowning in technology.

A creative and repetitive analysis of our collective infatuation with glowing screens.