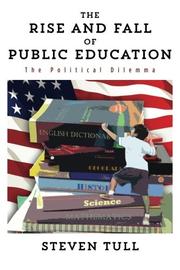 THE RISE AND FALL OF PUBLIC EDUCATION

In this well-structured treatise, Tull (The Rise and Fall of the Unions’ Empire, 2013) gives an overview of what he sees as the sad state of affairs in American schools. In it, he offers a history of public education, a diagnosis of what he sees as its problems and “several choices to reverse the descending freefall.” Many readers may agree with him that the No Child Left Behind Act of 2001 has been a colossal failure, with lots of unintended consequences. The author specifically criticizes the use of standardized testing as the ultimate indicator of student achievement and teacher effectiveness. As he flatly states, “Incentives based on student grades needs [sic] to be eliminated.” Some of his proposals, such as proper nutrition and increased parental responsibility, easily fall into the mainstream. He also advocates for giving parents and students more choices, among a wider network of options: “Charter schools, online schools, home-schools and private school voucher programs must become fully implemented.” However, some readers may question a few of his suggested corrective measures, such as the establishment of military schools for repeatedly disruptive students and mandatory uniforms for all. According to Tull, teachers’ unions must also accept a marked decrease in benefits and end the practice of granting tenure. The author hasn’t worked as an educator himself, so he relies upon a wide array of data and anecdotal evidence to support his claims. To that end, he provides an impressive array of statistics in appendices that comprise half the text. This data is perhaps the author’s most valuable contribution to the contentious debates surrounding educational reform, as it allows readers to compare the United States with other countries and to evaluate figures for individual states. He also includes a helpful key for acronyms and a list of recommended readings. Ultimately, although readers may find some of his arguments unconvincing, they’re nonetheless worthy of consideration.