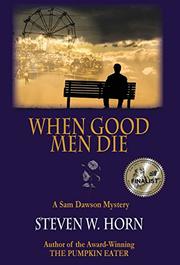 In this second outing of a strong mystery series, a nursing home murder sparks an investigation into the past of a former circus wrestler and Olympian.

Eight years after the events in The Pumpkin Eater (2013), it’s 2007, and Sam Dawson is still photographing old cemeteries for coffee-table books, this time focusing on Deep Lake, Minnesota. When he arrives with his vintage Airstream, he decides to take his dog to visit the Whispering Pines Care Center and perhaps snap some photos of residents (he’s getting bored with cemeteries). But Aimee Pond, the nursing supervisor, is thornily unfriendly, and the local sheriff is more so, particularly after an old woman is found murdered at the nursing home, putting Sam under suspicion. Interspersed with the 2007 story are flashbacks jumping back and forth through the memories of Whispering Pines resident Hans Gottlieb, who’s nearly 100 years old. Hans’ son Will knows almost nothing of his father’s life except that he worked on the railroad. But Hans has many secrets, including having been a champion athlete and masked carnival wrestler. His curiosity piqued by the mysteries swirling around Deep Lake, and for his own sake, Sam must find answers while also settling the question of what to do next professionally. Horn, in his third novel, again demonstrates the intelligence and complexity of the first Sam Dawson mystery, elevating the story beyond the usual detective business of clues, evidence, hidden connections, and suspects. Many pieces do fall into place at last but more for the reader than for Sam. An intriguing theme pervades the novel: the impossibility of truly reconstructing the pasts of those who become lost to us through time or dementia. Even our own parents are essentially opaque: “At best, we only see glimpses of who they really were,” Aimee says. Added to this is our desire to be deceived, which the carnival scenes colorfully illuminate. Horn’s characterization goes deep, and he paces events well, saving some surprising revelations for the end.