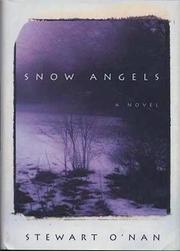 This first novel is an impressive achievement: a universal yet never generic examination of small-town tragedy. There are two sad stories here. The first is that of Annie Marchand, a woman unknowingly spiraling into deeper danger as her estranged husband loses his grip. After attempting suicide he becomes zealously religious and tries to win back his wife and young daughter. The second is the less dramatic tale of Arthur Parkinson, at that age when he is too old to be a boy but still too young to drive, whose parents are splitting up. The two characters live in the same town and have some tenuous connections: Marchand was Parkinson's beloved babysitter for a time; Parkinson's father worked briefly with Marchand's husband. One of the many ways in which O'Nan (the short-story collection In the Walled City, not reviewed) scores a bull's-eye lies in his depiction of the casual acquaintance of small-town inhabitants who rub up against each other almost daily without ever achieving a deeper connection. Telling both stories from some time in the future, Parkinson still perfectly recaptures the dreary days of high school. He gets stoned, listens to music, watches his mother start going out again on the weekends, and meets his father's new girlfriend. Parkinson tells all this with a painful intensity that, no matter how hard he tries, he can't disguise as not caring. His telling of Marchand's story is more direct and in the present tense, and the fairly lengthy alternating passages play off each other in a stop-and- start rhythm. While these characters are not terribly self-aware, O'Nan never condescends to them or makes their troubles seem inconsequential, even at comical moments like Parkinson's first stabs at romance with an eerie twin who shares his bus stop or his visits to a therapist with an office above ``the Hot Dog Shoppe.'' Solid and skillful. (Author tour)