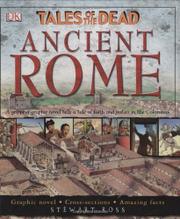 TALES OF THE DEAD

This fiction/nonfiction hybrid features topical spreads on life in the early Roman Empire, loosely connected by a story, told in graphic novel–style panels running along the margins, of two young North African captives sold into slavery. The made-up part is too trite and sketchy to be more than a temporary distraction. Likewise the text, printed in several sizes and faces, shoehorned into every nook and cranny, occasionally marred by factual errors (no, Roman roads weren’t built on wooden foundations) and written in a modern idiom throughout—“OK, so maybe I don’t get along with Sabina that well.” It’s the finely detailed (if blood and dirt free) history paintings, adorned with frequent cutaways and abuzz with small, busy figures, that will provide the real draw. Still, there’s more flash here than substance; steer learners, visual or otherwise, to the plethora of more systematic surveys already out there. (index, no resource lists) (Fiction/nonfiction. 10-12)