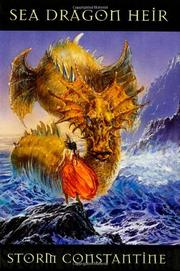 New fantasy, the first of a projected trilogy and first hardcover from the British author of the paperback Wraeththu trilogy. Here, the Magravandian Empire, with its fire god Madragore, has conquered Caradore, realm of the sea dragon Foy. Thereafter, the eldest son of Caradore’s ruling Palindrakes must serve the emperor. Two centuries later, Valraven serves Leonid II. Pharinet, Valraven’s twin, incestuously loves her brother and becomes angrily jealous of Ellory, Valraven’s betrothed. When Pharinet joins the Sisterhood of the Dragon (they keep secrets of dragon lore and nurse ambitions to send the Magravandians packing), she summons Foy from the ocean depths, but the dragon attacks Ellory, giving her a wound that’s slow to heal. Valraven, seduced by the imperials, becomes the lover of Leonid’s son Bayard. Later, Bayard visits Caradore and, seeming to know more dragon lore than Pharinet does, seduces her into attempting to mingle the powers of fire and water. Disastrously, the dragon takes Ellory, and Valraven turns cold and savage. Six years later, the focus shifts to Leonid’s daughter Varencienne. She marries Valraven, comes to Caradore and, confirming a bond with the dragon, calls it from the sea. She gives birth to twins, Valraven and Ellory, and in an out-of-body experience learns that Foy is weary and only wants to die. Caradore must achieve freedom by another means. A carefully plotted, beautifully detailed fantasy family-saga spoiled by a thin, trite storyline; the midstream point-of-view switch doesn't help.