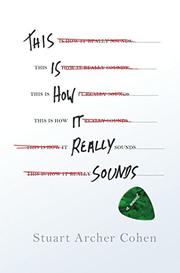 THIS IS HOW IT REALLY SOUNDS

An impressive and dramatic novel about three men who share a surname and intertwining fortunes.

Pete Harrington is a fading rock star who's shocked to find his fancy car being repossessed. Harry Harrington used to be the best “extreme skier” in the world, dominating a sport few knew existed. Wall Street financier and greed-hound Peter Harrington has “amassed hundreds of millions of dollars in five short years” through legal tactics that have hurt many other investors. He has made “more in interest each day doing nothing than most people earned working all year.” Meanwhile, Pete’s $8 million holdings have shrunk to $400,000 due to a poor investment—in Crossroads Partners, an enterprise set up by Peter. Now Pete must sell off costly tchotchkes to pay off his debts, as “fifteen years of his life turned into yellow tags at a secondhand store.” He becomes obsessed with payback. Pete wants more than anything else to walk up to Peter and sock him in the nose. “Once in a while somebody’s got to kick the crap out of greed,” he says. He hires an old CIA retiree, Charlie Pico, to teach him how to deliver the best possible punch. Meanwhile, friends remind Pete that he'll be committing assault, so maybe he can do the deed in China? Pete is a sympathetic jerk whose odyssey is fun to follow as he trains for the big confrontation and recalls a fight he once had with the bass player from the rock band Uncle Sam’s Erection. Harry’s storyline is less tightly connected to the others, with dazzling skiing scenes in which he courts death and races megaton-sized avalanches.

Anyone who's bet his or her future on Wall Street, strapped on a pair of skis or savored a well-told story will want to read this one.