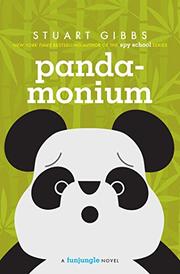 From the FunJungle series, volume 4

In this fourth roller coaster of an endangered-species mystery, Teddy is still living at the giant zoo/amusement park called FunJungle, and he’s still smack dab in the epicenter of the brouhaha.

Middle schooler Teddy, his girlfriend, Summer, and hundreds of panda fanatics anticipate the arrival of a rare panda from China named Li Ping. However, when the guarded truck reaches FunJungle, Li Ping is gone, replaced by a ransom note. Having learned from past mistakes and at the behest of the FBI, Teddy tries to avoid getting involved. No such luck, because his bungling park-security nemesis, Marge, blackmails him into investigating the official investigation. When a villain dressed as a panda throws Teddy into the freezing-cold water of the polar-bear exhibit, Teddy and Marge forge a new dimension to their relationship. They begin to work together, making some headway into narrowing down the suspects (which include the mythical chupacabra) of this monkey-wrenching whodunit. Gibbs never scrimps on creating belly-laughing hullabaloo for his white protagonists. Interweaving animal facts (pandas can produce 50 pounds of poop per day) into his plot, the author seamlessly inspires compassion and urgency on behalf of species endangered due to lack of habitat and exotic animal trafficking.

Never slumping into the formulaic doldrums, the FunJungle series keeps on chugging.