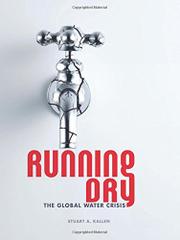 by Stuart A. Kallen

In urgent tones, a call for action as climate change and continuing waste and pollution of available fresh water pose imminent threats to human health and agriculture.

Drawing from recently published reports and news stories, Kallen paints an alarming picture. Aquifers are being sucked dry by large-scale agriculture, lake levels are falling, and water sources above- and belowground are being polluted. Though he points to a few significant counterefforts—the Clean Water Act (1972) in the United States and local initiatives elsewhere, such as “rainwater harvesting” ponds in India and Kenya—these come off as spotty responses that are often hobbled by political and corporate foot-dragging. He also points to shrinking glaciers and snow packs (plus, for added gloom, superstorms like Sandy) as harbingers of climate change that will lead to widespread future disaster. Aside from occasional incidents or examples and rare if telling photos, though, this jeremiad is largely composed of generalities and big numbers—not a formula for motivating young readers. Nor does the author offer budding eco-activists much in the way of either hope or ways to become part of the solution; for the latter, at least, Cathryn Berger Kaye’s Going Blue: A Teen’s Guide to Saving Our Oceans, Lakes, Rivers, & Wetlands (2010) is a better choice.

Cogent of topic, but for readability, it’s aptly titled.