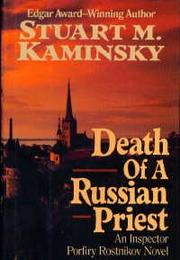 DEATH OF A RUSSIAN PRIEST

Kaminsky moves closer to becoming the Ed McBain of Mother Russia with this tale of two felonies, as Inspector Porfiry Rostnikov—in his seventh outing (Rostnikov's Vacation, 1991, etc.)—investigates the murder of elderly, politically outspoken Father Vasili Merhum in the village of Arkush, while his deputy Sasha Tkach—newly and uncomfortably partnered with Elena Timofeyeva—competes with a stone killer to comb the hot-spots of Moscow searching for Amira Durahaman, daughter of the Syrian oil minister. The only link between the two cases—the fact that Colonel Lunacharski of the KGB, hot for a public- relations coup that will consolidate his conservative political position, is plotting to steal Rostnikov's credit for solving both of them—leads to a magically effective epilogue. The usual strengths of the series—ingenious plotting, solid police procedure, and Rostnikov's shrewdly perceptive presence—are joined here by casually effective glimpses of the old Soviet Union in chancy transition. It all adds up to Rostnikov's best outing since A Cold Red Sunrise (1988).