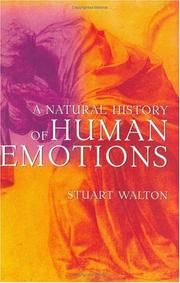 A NATURAL HISTORY OF HUMAN EMOTIONS

A British journalist and cultural historian pays tribute to, and expands upon, Charles Darwin’s thoughts on emotions.

Specifically, Walton focuses on The Expression of the Emotions in Man and Animals (1872), which postulated that the ways in which human beings communicate the six basic emotions of fear, anger, disgust, sadness, surprise and happiness are innate and universal. Walton (Out of It: A Cultural History of Intoxication, 2002) adds embarrassment, jealousy, contempt and guilt or shame to Darwin’s core emotions and then explores the psychological dynamics of these ten and how they have been evoked in our cultural lives. Each of his chapters opens with a relevant quote—e.g., Montaigne on fear, Benjamin Franklin on contempt, Cervantes on embarrassment—followed by an array of dictionary definitions, and where applicable, Darwin’s list of physical indicators, (spitting, shuddering and dilation of the nostrils, for example, indicate disgust). Walton follows the same pattern in discussing each emotion: First, he tackles the nature of the emotion itself and traces its semantic history; next, he examines the ways in which the emotion can be induced in others; and third, he looks at how it impacts the individual experiencing it. Thus, the chapter on shame, for example, begins with the mythical origins of shame in Genesis, looks at the link between shame and conscience, and examines representations of the shame of nakedness in literature and painting; next is a discussion of the intentional infliction of shame through public humiliation, with references to medieval methods of punishment and Hawthorne’s The Scarlet Letter; finally, he turns to the desire to bring shame and humiliation upon oneself, a discussion that ranges from the martyrdom of early Christians to Krafft-Ebbing’s work on masochism. Lest this sound unnervingly academic, Walton frequently draws on pop culture, citing the movies of Woody Allen, British sitcoms and Hollywood gossip columnists to make his points.

Not a deep analysis, but a fresh and entertaining survey.