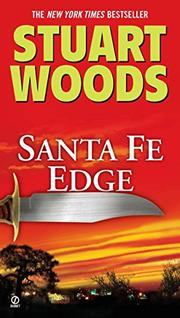 Santa Fe attorney Ed Eagle’s murderous ex-wife and assorted lesser satellites continue to hatch plots at cross-purposes, all as inconclusively as ever.

In the nine weeks since she was sent to a Mexican prison for attempted murder (Santa Fe Dead, 2008), Barbara Eagle Keeler hasn’t been wasting her time. She’s been using the episodes of rape by Warden Pedro Alvarez to gather information that will help her escape and work more havoc back in the United States. Assisted more directly by James Long, the film producer who’s not only her lover but the prospective colleague of Ed’s new wife Susannah Wilde, she hatches a plan to kill Ed and his bride. When they get a whiff of Barbara’s escape despite Alvarez’s insistence that she was merely transferred to another prison, Ed’s longtime private eyes, Cupie Dalton and Vittorio, decide that their best defense against her is a good offense. Not enough malfeasance for you? Soon after Ed gets the murder charges against his latest client, golf pro Tip Hanks, dismissed, Tip takes on a new personal assistant, Dolly Parks, who just happens to be the serial embezzler who killed Tip’s wife. Meanwhile, Todd Bacon, the CIA’s station chief in Panama, is hot in pursuit of Teddy Fay, the CIA agent turned assassin who’s eluded every attempt made to catch him. None of this violent, weightless intrigue goes anywhere, of course, but the dialogue, reeking with obtuse self-assurance, is full of guilty pleasures, from Ed’s admonition to Susannah (“If you keep on shooting people we’re going to end up in court”) to Barbara’s prayer entreating a disputed legacy from the Almighty (“If you’ll let me have this money, I’ll never kill anybody again, not even Ed Eagle!”).

In retrospect, Woods’s endless rounds of dead-end scheming find an uncanny echo in contemporary reality TV. Think of this as one more installment in The Real Sexed-Up Felons of Santa Fe, with all the pleasures and limitations that title implies.