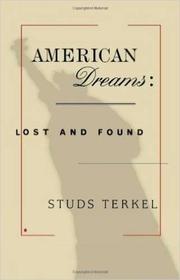 Terkel off and interviewing again. The quality of these one hundred interviews is high, but the focus remains elusive throughout. In both Working and Hard Times people spoke of specific and concrete issues; here, however, they stumble in addressing a catch phrase that means both too much and too little. There's the expected American dream of making it big, typified by the gung-ho president of a stone quarry ("If you're not getting better and faster, you're getting worse"); but there's also the growing desire to keep it small—the third-generation farmer struggling to protect the family farm against agribusiness. The American dream is patriotism to some, including a professor of American history ("This idea that we're important to ourselves as individuals and collectively as a nation"), while to others it's a sham (a Japanese couple in Seattle share the sentiments of other minority representatives in seeing it as "for whites only"). It is education for a New York cabbie and reformed street-gang girl, freedom of worship for a born-again Christian and a Hare Krishna member. Yet among the most interesting are those who now view their former dreams with skepticism, including a former Miss U.S.A. who in the last minutes of her final television appearance rubbed her finger against her nose to signal "the con is on." Helen and Scott Nearing add a nice touch of leavening to the talk of dreams by insisting quite simply, "The job is to keep your head above water and to do your share in making the dying society as tolerable as possible." Interesting passages, though no lingering melody.