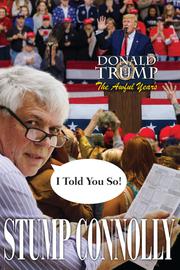 I TOLD YOU SO!

Even with his seasoned career as a senior producer for multiple PBS election specials and chief political correspondent of The Week Behind since 1995, nothing could prepare Connolly for the unprecedented nature of Donald Trump’s presidency. In this edited compilation of Connolly’s commentary, readers can relive the tumultuous Trump presidency through the lens of a battle-hardened political observer. From its opening page, which begins with a 2012 Sarasota County, Florida, “Statesmen of the Year Award,” the dissonance of Trump becomes wildly apparent, as the then-host of The Apprentice lambasted the media and political establishment for its unfair, “terrible” treatment of Mitt Romney and Hillary Clinton—two figures he would himself harangue just four years later during his successful presidential campaign. Connolly’s smart, acerbic commentary walks readers through the Trump presidency, with concise editorials on the 2016 campaign, impeachment, mismanagement of the Covid-19 pandemic, post-election tantrums that culminated in the Jan. 6, 2021, Capitol insurrection, and more. Unsurprisingly, Trump presents as “mean, stupid, selfish…and unfit to be president.” Moreover, Connolly reminds readers that the ideologically nondescript Trump himself only took stances that favored his political or financial endeavors. On climate change, for instance, Trump fought “tooth and nail” against proposed wind turbines adjacent to his golf courses yet was equally passionate about building seawalls on an eroding Irish coast that threatened his property. While mostly centered on Trump, Connolly’s commentary also provides insights into his sycophants, like Sean Hannity, and rivals, like Hillary Clinton. Without minimizing the grave consequences of Trump’s actions, Connolly successfully balances astute analysis with humor. Ample altered images and other gags (such as a mock letter from Trump to Biden left in the Oval Office) complement this approach. Like all political commentary, particularly that which is read retrospectively, readers of all ideological persuasions will find passages that they politically disagree with, but many would likely agree that Connolly is a shrewd observer.

An intelligent, witty perspective on the Trump years.