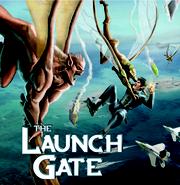 A rowdy sci-fi debut in which superhumans defend Earth against an angry pantheon of Greek gods.
Heronn Miller, of New York City, is 20-years-old when he experiences strange back pain. After examining him, Dr. Grahams sends his blood work to specialists. They learn that Heronn’s DNA is incredibly complex—he’s a walking nuclear reactor. Word spreads through the scientific community, and further study of Heronn is attempted. The superpowered youth only wants to be left alone, however. Confrontations with the police lead to several officers’ brutal deaths. Four years later, a more mature Heronn uses his preternatural strength and speed to help advance knowledge of space and the deep sea. At this point, another superhuman named Cannin challenges Heronn to battle. Next, Heronn is sent on a planned 8-week mission to study Pluto (where a Launch Gate to Mount Olympus may be located). The forces of darkness at the Earth’s core choose this moment to take revenge on a populace that no longer cares for gods, only technology. Lord Hercules commands Hades to destroy the United States, which he does using the nation’s own nuclear arsenal. When Heronn returns to Earth, he assumes Cannin is responsible for the chaos. This sets up the violent three-way showdown of Isaac’s debut. The author has an instinct for impressive set pieces. While Heronn is flying back from Pluto, he plunges straight through Jupiter, and “a trail of dust chases behind him.” He also caters to fans of gory, choreographed battles, like when Heronn is “ripping off the last pieces of flesh” from one of Hades’ minions. The prose, unfortunately, provides sharp uphill reading (“Closing line the beast and, sending the two of the them into a spiral fall to Earth”). Heronn’s use of the slur “homo” won’t endear readers either.
Slapdash writing drains the power from otherwise incendiary sci-fi fare.