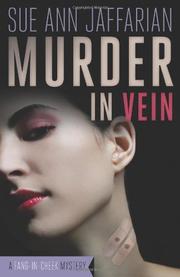 Waitress Madison Rose can hardly believe it. First she’s snatched from outside Auntie Em’s Diner by a thug named Bobby. Just as quickly, Bobby is dispatched by two senior citizens who gnaw him to death. That’s because Doug and Dodie Deadham are vampires who’ve been living in quiet luxury in Topanga Canyon. The Deadhams are dead set on finding out who’s been killing people whose palms are marked with faint red bloodlines (the only humans who can be turned into vampires), in part to protect their secret and in part to protect future vamps. For reasons not clear even to Madison, she agrees to help them. Under the direction of centuries-old Samuel La Croix, head of the California Vampire Council, she lets sexy Colin Reddy squire her to clubs where vamp wannabes test their dentist-implanted fangs on willing young flesh, blissfully unaware that the real item is under their stylish noses. Because when real vampires bite, they don’t play, as posers like Lord Wilhelm and Lady Harriet of Dark Tidings soon find out.

Like Stuart Kaminsky, Jaffarian juggles her franchises deftly, giving each a unique voice and appeal. Her latest series kickoff may be her best yet, blending supernatural sexy with down-to-earth sassy.