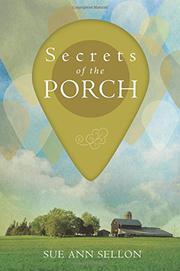 Secrets of the Porch

In Sellon’s (Carly’s Calling, 2003) second novel, a rebellious teenage girl is sent to live with her grandmother on a Nebraska farm.
Sixteen-year-old Sophie Mae Randolph has been adrift, both physically and spiritually, since her mother, Grace, died from cancer. After Sophie and her abusive boyfriend are caught holding up a gas station, she’s given a choice: head to a juvenile detention facility or go live with her grandmother Lila, whom she’s never met. Reluctantly, she chooses the latter. At first, the worldly Sophie dismisses Lila as an “old bat.” Eventually, however, she opens up to the older woman, especially after Lila shares the tragic story of why Grace, her only daughter, left home with the infant Sophie. Months pass, and Sophie thrives in her new surroundings, even beginning a tentative romance with a boy from her school. But Lila has a secret, and it isn’t until a dark figure from the past shows up at the farm one night that the truth is finally revealed. This is a charming fish-out-of-water story, and it’s hard not to sympathize as the spitfire Sophie adjusts to her new surroundings—after all, she’s traded sleeping under bridges for collecting eggs and forking hay. But farm chores aren’t the only thing that Sophie has to get used to; she also gradually allows faith to reenter her life. By listening to Lila “preach about God and everything he had blessed [her] with,” she eventually comes to terms with her mother’s death. This gentle exploration of how faith and forgiveness allow people to overcome devastating traumas centers the book and makes it more than just a simple tale of small-town secrets and romance. Sellon gracefully weaves past events into the present drama, crafting an engaging, multigenerational story. That said, a bloody denouement on the farm’s front porch strains credulity, and the ending wraps up the lives of these complicated characters too neatly. Overall, however, this is a satisfying tale of love, hope and redemption.
A sweet, smart story about growing up and learning to trust.