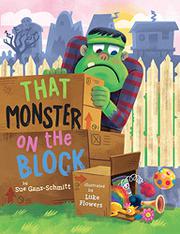 THAT MONSTER ON THE BLOCK

You never know about neighbors.

Monster wonders who’s moving in next door. The new neighbor might be an ogre, goblin, or dragon, so he practices his best welcoming growl. Then, the new owner turns out to be…a clown. Monster calls pals Zombie, Mummy, and Yeti with the news. All steadfastly ignore Clown—because he’s not a monster. Undeterred, Clown introduces himself around to no avail. Clown leaves notes and gifts; still, no one responds. Monster determines to scare him away. Unwittingly, Clown endears himself to the neighbors in the meantime. When Monster confronts his nemesis, he discovers his friends cavorting at Clown’s impromptu circus—and decides to cultivate an open mind. In an unsurprising ending that feels rushed and tacked on, Monster has fun at the circus and invites Clown to a party. During the festivities, a new nonmonster moves into the neighborhood. This time, the newcomer is heartily welcomed, its obvious differences now accepted by everyone. This humorous, fast-paced story, narrated with clipped sentences, conveys an important, unsubtle message about the importance of accepting diversity: The “monster” is one who thinks friends must be similar to them. Type is set in various fonts and colors, heightening visual appeal; lots of onomatopoeic sound effects are incorporated into the text. Highly expressive characters feature in the colorful, comically silly, frenetic illustrations.

This entertaining tale about making new friends may also help readers conquer their fear of clowns.