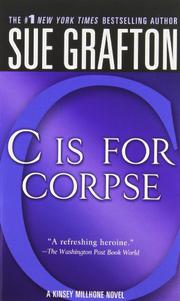 'C' IS FOR CORPSE

From the Alphabet series, volume 3

Third in Grafton's dashing trip through the alphabet ("A" is for Alibi, etc.) and probably her best so far. Gutsy, smart, twice-divorced private eye Kinsey Millhone has been hired by super-rich young Bobby Callahan to find out who almost killed him months before in a car crash that his best friend, Rick Bergen, didn't survive. Kinsey starts with Bobby's mixed-up family—cool, deeply devoted mother Glen, not-too-bright stepfather Derek, whose adolescent daughter Kitty is starving and drugging herself to death. Then, there are family friends—pathologist James Fraker and gorgeous wife Nola, surgical nurse Sufi Daniels and Kitty's psychiatrist, Leo Kleinert. Kinsey hasn't a glimmer of light through all this and more when Bobby dies in another car crash. Intensifying efforts to find the killer while managing to rescue her lovable old landlord Henry from the clutches of a seductive lady crook, Kinsey then puts the complex bits and pieces together at last—finishing up with a tense, near-fatal confrontation with the murderer. The author's style is warm and swift, the plot intrigues even if far-fetched; best of all is Kinsey Millhone—who's got brains and a sense of humor.