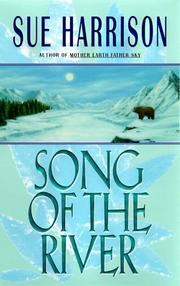 SONG OF THE RIVER

As in Brother Wind (1994) and others, Harrison once again displays her first-rate storytelling talents, here in a rousing tale of murder, revenge, and internecine warfare. The stunning backdrop this time consists of the coast and interior of what is now Alaska in the far, far mists of the seventh century b.c. was home of the Aleut peoples. Chakliux, the Dzuuggi (a favored child trained in oral traditions), was born to a woman of the Near River Village and as a newborn put out to die because of a deformed foot. He was found by K'os, a fiery, bitter young woman of the Cousin River people, and raised by her. Eventually, Chakliux returns to Near River, but the anger of K'os, bent on a savage revenge upon those who have wronged her (and out of pure meanness to hurt those who haven't), brings ruin to the efforts of Chakliux, a wise and gentle man, who's determined to bring peace among the villages. Then in Near River, Daes, mother of a young boy by the trader Cen, is mysteriously murdered, as is Chakliux's old grandfather. And why are the village dogs dying? Bad feeling swirls around Chakliux, who travels to the wise Cloud Finder of Cousin River to acquire the strong ``golden-eyed'' dogs. But Cloud Finder is killed by warriors egged on by K'os. Finally, Chakliux and his often untrustworthy brother Sok travel to other villages. In the First Men Village is Aqamdax, a trained storyteller, daughter of Daes. She'll be betrayed by Sok, accused of murder by the Walrus Hunters, and wind up as a slave to vicious K'os before escaping to a difficult marriage. At the close, murders of people (and dogs) are solved as war rumbles, though the good guys form a new village- -with two storytellers and a dog named Biter. A warm yarn from the frozen North and as authentic as all get- out, with maps, glossary, author's clarifying notes—the works.