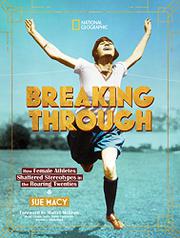 How Female Athletes Shattered Stereotypes in the Roaring Twenties

A feminist look at how events of the 1920s informed the role of female athletes through the next century of American sports.

Art deco page designs, colorized archival photos, and reprinted news articles bring readers into the Roaring ’20s, illustrating a time of radical change in women’s liberation through the lens of sports. Chapters, broken down in two-year increments, focus on athletes and events that moved women forward in an arena dominated by men. Contextualized primary-source articles presented in sidebars help show how women challenged the era’s preoccupation with femininity, at odds with athleticism, though at times the main narrative repeats this information. Efforts are made to explore racial segregation in sports and to highlight the important roles played by athletes of color as well as how historically black colleges and universities were more forward-thinking in supporting women athletes than white institutions tended to be. The author’s note addresses the challenge of drawing a full picture due to lack of documentation of athletes of color. When discussing sports and athletes outside the U.S., the narrative is Eurocentric with the exception of a spotlight on Japanese athlete Kinue Hitomi. An epilogue ties events of the 1920s to pinnacle moments such as the passing of Title IX and the 2019 Women’s World Cup while discussing the disparities still prevalent in sports.

A recommended introduction to an often overlooked aspect of feminist history.