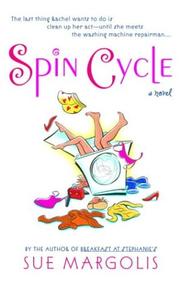 Can a divorced stand-up comedienne find happiness with a washing-machine repairman?

Sure, says the author of Neurotica (1999)—particularly when her dentist fiancé is away in South Africa. Rachel Katz isn’t positive she wants to marry Adam anyway, even if her mum is busily planning the wedding. Oh, well. Adam makes a good living even if he is deadly dull and prone to nosebleeds; and, despite her dreams of glory, Rachel isn’t exactly setting audiences on fire at the Anarchist Bathmat comedy club. Shelley, her best friend and neighbor, a health-food nut with gigantic bosoms, lends a sympathetic ear. Freewheeling Shelley isn’t sure Rachel should marry Adam, either. Rachel’s ten-year-old son Sam is indifferent, but he doesn’t really think about anything except his growing collection of Barbra Streisand records. Is it possible he’s gay like his father? Rachel frets over this until Matt Clapton, a hunky washing-machine repairman, becomes a distraction. He thinks she’s hysterically funny, and he’s happy to be her (cough, cough) handyman. Rachel feels a few pangs of guilt for cheating, but she reasons that it doesn’t matter since she and Adam hardly ever had sex. She’s got other things to worry about: her mum is having a bikini wax and shopping for revealing underwear. What on earth? Then she catches her parents doing something wild with another elderly couple! The truth comes out: Mum and Dad are baring their wrinkly bottoms for a how-to sex video for seniors. Oh, well. No big deal compared to the latest news flash from South Africa: Adam’s dumping her for an anorexic dental hygienist who starches her underwear. Rachel can’t worry about that now: she’s getting ready for a big comedy competition, which she just might win if an Aussie upstart doesn’t steal all her material. Life goes on, and so do the silly contrivances.

Pleasant enough in a punny way, but awfully British. Lots of sex to compensate for the lame jokes.