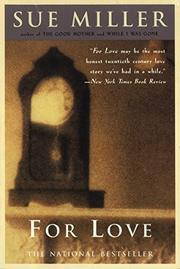 Here, the author of Family Pictures (1990), etc., graces us with nothing less than a disputation on the nature of love—from whence, at least in Miller's world, all other emotions (and a great deal of often extreme behavior) come. This time out, her extraordinarily intelligent, if agonized, protagonist is Charlotte Reed, a nonfiction writer and divorcee with a grown son, Ryan, and new husband, Jack, a widowed oncologist. But as the story begins, Charlotte's left Jack, presumably to get her aging mother's Cambridge home in shape to be sold—since her brother, Cam, has put their mother in a home. Charlotte's other reason for flying the coop is that she doesn't think she can hack the new marriage: Jack's teenaged daughter is a pain, and Jack himself seems unable to stop grieving for his first wife. And her real reason, she comes to understand, has to do with being afraid that she doesn't love Jack the way she used to. She yearns for a kind of wild, romantic love, and sees it in the way her brother behaves with his new flame, Elizabeth, a neighbor in Cambridge. Elizabeth has returned home because her husband is playing around. She starts doing so, too, with Cam, though for him the relationship is less a fling than an expression of his unbalanced approach to life. Tragedy strikes in the form of an accident that kills Elizabeth's au pair girl, with Cam behind the wheel. Her death sets Charlotte off on an intense emotional hegira, which eventually leads her back to Jack and a different kind of love—a love that has as much loss in it as passion. Seared by several extraordinary arguments—between Lottie and Cam and others—and by a handful of characterizations so full that they suggest whole novels revolving around Miller's secondaries. Miller's special brand of intelligent emotionalism reaches its zenith here: it's deep, resonant, splendid.