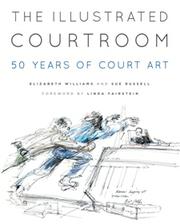 A new approach to understanding the criminal justice system through the eyes of courtroom artists.

The drawings and paintings that make up this collection, compiled by debut author Williams and Russell (Lethal Intent, 2013), are the work of courtroom artists, the only people able to capture images in the many courtrooms where video and photography aren’t permitted. Striking images accompany artists’ reminiscences of the trials they have covered. Many of the cases are explored in detail, and some are well-known—the O.J. Simpson trial, Iran-Contra, Martha Stewart’s insider trading. The collection also includes stories of memorable attorneys and defendants, along with representative images. The anecdotes shared by the artists range from the unexpected—e.g., an undercover detective attempted to bribe an artist to destroy a drawing that might reveal his identity—to the absurd—Judge John Sirica threatened to expel anyone chewing gum in his courtroom—to the touching, particularly the depictions and descriptions of witnesses delivering their testimonies through tears. The images included in this collection demonstrate that a charcoal or pen-and-ink drawing, while dependent on an artist’s style and unable to match the precision of a photograph, can be more effective in conveying the mood of a courtroom, as in a Howard Brodie sketch of the scene at the opening of the Watergate trial. A Bill Robles drawing of Patty Hearst’s father writing a $500,000 bail check tells a story in itself. When Aggie Kenny describes her experience covering the organized crime trials of the 1980s—“Few defendants interact with artists or really seem to care what we are doing. But I always sensed that mafia guys understood the process and saw it as part of the business”—it’s clear that courtroom artists provide an essential, often overlooked perspective on the justice system, one that is a crucial part of understanding the legal history of the United States.

Reveals one fascinating aspect of the legal system, informing the reader while demonstrating the value of artistic interpretation.