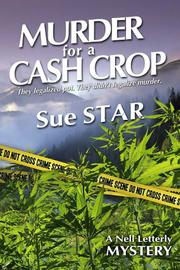 Murder for a Cash Crop

A middle-aged mom decides to track down the arsonist who burned down her best friend’s house.

Nell Letterly, the brave heroine of Star’s (Murder in the Dojo, 2011) newest mystery tale, is just starting to get over her estranged husband when a freak accident rocks her hometown of Boulder, Colorado: A fire tears through the house of her best friend, Alice Albright. Alice had been running a struggling art gallery there, and suspicions begin to arise that she was selling newly legalized marijuana—without a license. Nell concludes, “I had to do something…I was going to free Alice from suspicion,” launching her into a twisted web of strange connections and revelations about the townspeople as she conducts her own investigation into the crime. Soon, bodies start turning up in the wake of the fire, including an old friend of Nell’s husband, and her determination to solve the puzzle intensifies. When Alice disappears in the middle of Nell’s search for the perpetrator, she starts to question her friend’s part in the crime. Is Alice an innocent bystander or is there something more sinister behind her innocent exterior? Nell is a scrappy private eye. “No wonder I had to solve his case for him,” she thinks after meeting one of the incompetent detectives working on the investigation. Nell chases down her leads—from the shady French cook who seems to know all the victims, to the spurned ex-wife of a famous painter—while juggling her responsibilities to her teenage daughter, and her own mixed emotions about her husband who abandoned her several months earlier. There’s a cinematic quality to this fast-paced, straightforward, easily digestible thriller, and it’s worth a read just to get close to the clever, “positively old-fashioned” Nell, who though out of touch as she might be, is an admirable, and relatable protagonist. At one point, she muses about pot: “Some thought it was nirvana, others thought it was evil incarnate. I just thought it was a poor substitute for meditation. Of course, I didn’t have experience with any stimulants other than meditation and heavy martial arts.” Star’s latest Nell Letterly mystery is like eating a slice of cake: nothing too substantial there, but enjoyable and delicious nonetheless, a guilty pleasure of a book perfect for the beach.

A lighthearted, formulaic, but ultimately satisfying mystery novel with a charming heroine.