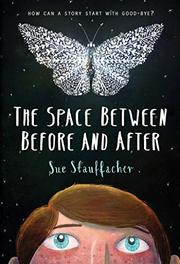 THE SPACE BETWEEN BEFORE AND AFTER

A boy struggles to make sense of his mother’s disappearance in this meditative middle-grade novel.

Ten-year-old Thomas’ mother has for years experienced what his family refers to as her feeling “sad, tired, low…blue”—but never naming her disorder as depression— before she surprises him one morning with a vivid description of a dream she’s had of being at the airport, preparing to board a plane. When Thomas returns from school that afternoon, she has vanished, and Thomas and his father and aunt spin into a realistically all-consuming confusion. Short, slowly paced chapters from Thomas’ first-person point of view form the main narrative, interspersed with an invented fairy tale he imagines with his kind, elderly Hungarian neighbor, Mrs. Sharp, who as a girl was separated from her father during World War II. Though in anguish, Thomas is supported by many, including his (at times overly) exuberant friend Giselle and Aunt Sadie, who along with Mrs. Sharp help his father understand that his disapproval of anything fanciful is harming his son’s ability to contend with the darkness in his world. All of the characters seem to be white by default, and though the story is set in the present, its quiet tone has the feel of the historical at times.

A poignant, earnest story of grief and hope for fans of realistic fiction.