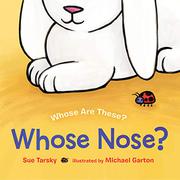 From the Whose Are These? series

Partial views of several animals highlighting noses ask readers to guess the name of each based on a singular descriptive word.

Opposite concepts are presented for each pair of noses, as in the opening pages: “big nose / tiny nose.” The rather substantial nose of a proboscis monkey is on the left page, and the wee snout of a mouse is on the right. The full animal is never revealed in the black-outlined full-bleed paintings, requiring a guess of the animal’s name. So for the proboscis monkey, a portion of its face and body are shown, while for the mouse, just its whiskered nose peeks out from behind a rounded mouse hole. Readers must refer to the endpaper key to confirm the correct answers. The concept continues throughout, pairing shapes, sizes, and other nose-related features. The simplicity of each two-word phrase with its hidden picture provides opportunities for discussion. The familiar animals will be easily identified, while the lesser known, such as the “narrow nose” of a shrew or the “red nose” of a mandrill, will need some contemplation. Similarly, Whose Tail employs the same strategy; tails are drawn from a fairly easy mixture of farm and zoo animals except, perhaps, for the meerkat. Both end with human portrayals, Nose showing a man’s mustachioed nose and a child’s freckled one (both are white) while Tail depicts children of color, one with no tail and the other wearing a fox costume with a big bushy tail.

A fun and interactively informative introduction to the animal kingdom.