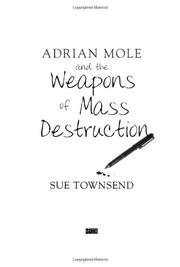 ADRIAN MOLE AND THE WEAPONS OF MASS DESTRUCTION

Loveable loser Adrian Mole turns 35 in the latest installment in the British series.

Townsend began tracking Adrian’s wholly mediocre life in The Secret Diary of Adrian Mole Aged 13¾ (1982). Set between 2002 and 2004, this, like the others, takes the form of diary entries. Here a slightly more responsible Adrian emerges. Despite a few setbacks—his cooking show, Offally Good!, has been cancelled, and youngest son William has gone to live with his mum in Nigeria—he’s finally moved out of his parents’ house. Adrian has bought a posh loft at Rat Wharf and some dangerously white furniture to go with it. He is doing well as an assistant to an antiquarian bookseller and may even have found a remedy for the unrequited love of his life, Pandora Braithwaite, in the form of Miss Marigold Flowers. But happy times have short tenancy—in fact, just a few days. Adrian’s initial attraction to Marigold’s fragility disappears when he’s nearly bored to death during a long tour of her doll houses. But no matter: Marigold tells everyone they’re engaged and Adrian seems helpless to contradict her. Likewise, life at Rat Wharf turns out to be less than ideal when the picturesque canal swans begin menacing Adrian, and his upstairs neighbor complains at the noise made when Adrian boils water. Finally, Adrian’s credit-card debt is mounting, thanks in part to his “resourcefulness” in taking cash advances on newly offered cards to pay the minimum on others. Things get worse: Marigold says she is pregnant and sets a wedding date, Adrian begins a torrid affair with her sister Daisy and his son Glenn is stationed in Iraq. With her usual dark wit, Townsend skewers the Blair government’s search for WMDs, the pervasive hell of modern debt and the everyman’s inability to master love.