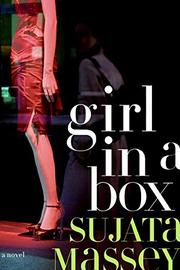 GIRL IN A BOX

Japanese/Californian dilettante sleuth Rei Shimura (The Typhoon Lover, 2005, etc.) can’t understand why her boss, Michael Hendricks, of the ultra-secret Organization for Cultural Intelligence, thinks a retail balance sheet should interest the U.S. government. Seems that Warren Kravitz, senior partner of Winston Brothers, an American investment bank, has complained that glitzy Tokyo emporium Mitsutan’s disproportionate profits suggest stock-price manipulation, possibly intended to attract a takeover by U.S. giant Supermart. So why should Rei quibble with a mission that would take her back to her beloved Japan to execute an undercover job as a Mitsutan salesclerk, complete with employee discount and an OCI shopping allowance? Well, the job is not as cushy as it sounds. Rei’s predecessor, agent Tyler, wound up dead. Assigned to K Team, Mitsutan’s personal shopping corps for foreign customers, Rei is undermined at every turn by half-Korean co-worker Miyo, until Rei figures out the key to securing Miyo’s friendship: hooking her up with a wealthy gaijin, preferably American. Rei crashes a company retreat at a hot spring and, after being harassed by four senior executives, manages to bug their shoes. She records the chairman threatening someone before an exec turns up dead. Fearing Rei’s in too deep, Michael flies to Tokyo in time to debug her navel ring. Then Rei, only temporarily deterred by a maxed-out credit card, and Miyo shop until they’re adequately outfitted to troll the clubs for eligible rich guys. They meet Archie and Ravi, two junior Winston Brothers traders. Ravi worries that Winston is accepting yakuza cash for laundering, and Rei unwisely urges him to blow the whistle. When thugs stage a reception at Rei’s apartment building and Ravi leaps from a window to his death, Rei must go into hiding at a luxe Tokyo hotel. A comparison of her shopping receipts and Mitsutan’s sales records exposes the nature of the store’s skullduggery; not what Michael and Warren suspected, but—no surprise—worse.

A voyeur’s tour of consumption-crazed Tokyo is the real point here, with Rei-san, as always, a companionable guide.