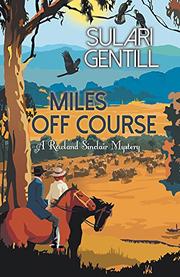 A wealthy artist with a sideline in sleuthing is beset by danger in Depression-era Australia.

Rowland Sinclair is the youngest of three boys in the wealthy Sinclair family. Aubrey, the middle brother, was killed in the Great War, and Wilfred, Rowly’s very conservative oldest brother, runs the family businesses and disapproves of his bohemian kid brother, whose permanent houseguests—lower-class fellow artist Clyde Watson Jones, poet Milton Isaacs, and beautiful sculptress and model Edna Higgins—are all leftists. Soon after they learn that someone’s been kidnapping wealthy people, Rowly, Clyde, and Milton must fight off three intruders. Wilfred arrives with a request for Rowly to go up to cattle country, where one of their employees has vanished, hoping that his excursion will keep him away from danger. The man Harry Simpson, an Aboriginal, was supervising claims that he just went walkabout, but both Rowly and Wilfred are sure the man they have known for years is unlikely to have walked off. Rowly and his friends head for the High Country and right into trouble. Someone tries again to kidnap Rowly. At the guesthouse where they’re staying, Rowly meets an old school friend who claims someone is trying to kill him and Sarah Brent, a fiercely feminist writer who worked as governess to Rowly’s brothers before he was born. Rowly also meets Moran, who’s now in charge of the crew working the Sinclair cattle, and doesn’t take to him at all, especially when he opines that they needn’t bother to look for Harry. Saddling up and heading for the mountains, the group, including Sarah, runs into many more dangers before Rowly can unravel a host of problems from rustling to treason.

Gentill’s third (A Decline in Prophets, 2016, etc.) reads like a superior Western, alternating high adventure with social and political observations about prewar Australia.