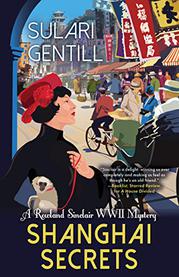 A carefree cadre of Australian artists probe a shocking murder in war-torn 1935 Shanghai.

Despite his status as the family’s renegade, suave Sydney artist Rowland Sinclair is tapped by his starchy elder brother, Wilfred, to go to Shanghai to handle international wool negotiations for Sinclair Holdings. Intrigued by the city’s vibrancy and turmoil, Rowland’s friends—poet Milton Isaacs, artist Clyde Watson Jones, and sculptress and model Edna Higgins—accompany him and take up residence in the posh Cathay Hotel. Gentill opens each chapter with a short news item from the time, adding welcome context to the story by describing the dangerous encroachment of Japan, the threat of Communism, and the influx of Russian refugee women and German Jews, weaving each development into the story. Making lively banter and diving into local culture are high on the visitors’ agenda. On a night out at The Jazz Club, Rowland dances twice with beautiful Russian Alexandra Romanova, and they make a date for tea the following afternoon. The next day, he’s horrified to discover Alexandra’s corpse in his suite. Grim Inspector Randolph regards him as the prime suspect. Rowland's peril, coupled with the deep grief of Alexandra’s brother, Sergei, prompts the party to investigate, leading to even more elaborate explorations of Shanghai. A subplot that should delight series fans brings Rowland and Edna within a whisker of progressing from the friendship zone to unabashed romance.

A frothy retro cocktail with a whodunit chaser.