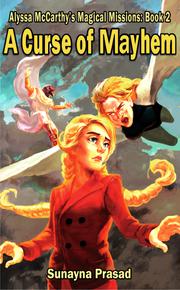 In this second installment of a middle-grade fantasy series, a teenager struggles to stop a curse that burdens her with troublemaking magic.

In her last adventure, 13-year-old Alyssa McCarthy had a run-in with sorcerer Master Beau. But the two’s residual “magical connection” is what the recently resurrected Errol now exploits. As Errol is a mere skeleton, he needs Master Beau’s power to regain his flesh and blood. His plan requires the sorcerer’s soul, which is apparently most effective when it’s linked to Alyssa. Consequently, Errol curses her with magic that the teen unfortunately can’t control. This leads to seemingly endless mishaps at school or at home with her godfather/legal guardian, Alex Kress. Alyssa’s mentor, Simon, has an unusual method for removing her unwanted magic. She must boost her confidence and bravery (using a handy skillometer to measure her progress) as well as uncover Errol’s past and “point out the painful parts to him clearly.” Alyssa’s confidence is currently low, and it’s especially difficult to raise it when her magic disrupts school activities and repeatedly lands her in detention. Moreover, Errol cooks up a scheme that will not only render Alyssa helpless, but may somehow harm Simon, Alex, and her friends as well. Prasad’s (The Frights of Fiji, 2018) breezy novel is frequently entertaining. For example, Alyssa’s involuntary magic creates several amusing sights, like a giant inflatable whale that easily shuts down cheerleading practice. There are also fantastic creatures, including a “winged unicorn zebra,” that have escaped from a magical zoo and add to the story’s increasing chaos. The author’s unadorned writing style accommodates more character discourse than scene descriptions. But she leaves room for playfully worded details: Magical tech works anywhere, courtesy of “an enchanted satellite in space, invisible to non-wizard astronauts.” Notwithstanding the tale’s humor, there are believably serious moments, from Alyssa’s incessantly defending herself against accusations (including that she’s a witch) to Errol’s genuine threat against her loved ones.

A high-spirited tale of a girl’s trials with a wizard and a skeletal baddie.