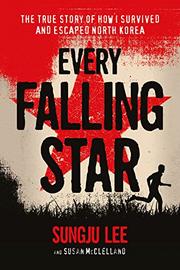 The True Story of How I Survived and Escaped North Korea

A pampered son of the elite survives a nightmarish ordeal in this page-turner of a memoir.

Sungju Lee’s carefree life, playing with his rare pedigreed dog and watching cartoons, comes to an abrupt end at age 11 when his family is banished to a remote seaside town after his army officer father transgresses in unspecified ways. The mid-1990s famine that eventually killed over 1 million North Koreans soon takes its toll, as each of his parents leaves in search of food and does not return. Teaming up with several friends, Lee travels the country—stealing in markets; fighting other gangs for territory; smoking, drinking, and using opium; getting arrested and imprisoned; finding clients for a madam’s “nightflowers”; and losing two of his friends in brutal attacks. Straightforward prose prevents this harrowing tale from overwhelming readers, but at times it may emotionally distance them. Over time the boys shed their faith in the regime but never give up on dreams of reunion with their families. A short foreword offers readers some historical context, but the story’s emphasis on the dangers of daily survival mirrors Lee’s lack of awareness at the time of larger political events.