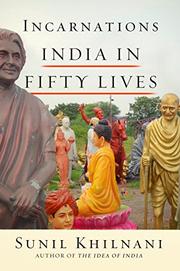 A selection of brief biographies of some of the most brilliant minds and personalities over the long course of Indian history.

From Buddha to Dhirubhai Ambani, the self-created celebrity entrepreneur of Reliance Industries, these 50 chronological lives span politics, the arts, academics, and social reform and include a handful of women and a few Westerners by birth, as well. Indian scholar Khilnani (India Institute/King’s Coll. London; The Idea of India, 1998, etc.) takes a soft-pedaling approach, fleshing out the entries with enough historical context to render the narrative accessible for all readers and concluding with a discussion of the subject’s importance in the overall scheme. Mahavira, from the fifth century B.C.E., was the Jainist seeker and teacher whose core principles of many-sidedness, truth, and nonviolence Mohandas Gandhi later incorporated to groundbreaking effect. Early Brahmin thinker Panini (fourth century B.C.E.) set out an early distillation of the sacred language of Sanskrit, and Adi Shankara (eighth century C.E.) organized the plurality and diversity of Hindu scriptures. Lawyer and politician Ambedkar, born an “untouchable" in 1891, challenged the Brahminic hierarchy of class and enshrined rights for Dalits (his term, meaning “broken”) in the new Constitution of 1950. Khilnani also includes a variety of Muslim leaders—e.g., Pakistani founding spirit Muhammad Iqbal (b. 1877), a poet and lawyer who championed a spiritual democracy (the “ultimate aim of Islam”), and Muhammad Ali Jinnah, a father of modern Pakistan whose shortsightedness is largely responsible for the disastrous violence following Partition of 1947. Some of the women include ecstatic religious poet Mirabai (1498-1557) and Congress Party leader Indira Gandhi (curiously, Indira's towering father, Nehru, is absent). William Jones and Annie Besant appear as important Westerners who immersed themselves in Indian languages and mores and inculcated the West. Khilnani’s choices are spirited, relevant, and aimed to provoke “pressing contemporary questions.”