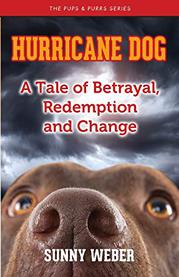 A Tale of Betrayal, Redemption and Change

A sweet pit bull mix recounts losing his home and family during a hurricane in this sequel.

From the moment he first rides home in the arms of his “boy” (named Gavin), the little brindle-patterned puppy learns to love and trust the humans in his life. But the canine signals early in the novel that heartbreak lies ahead. Describing Gavin’s touch, he says: “Over our years together, I trusted those hands. Even when I learned to hate the boy, I loved his hands.” It will take weeks for Gavin to select a name for his new best friend. Then, one summer day, while the boy dozes by a Louisiana fishing creek, an alligator creeps on shore and is about to attack. Gavin is awakened in the nick of time by his puppy’s fierce barking. He names the pooch Gator. Before their first year together is over, Gavin, his friend Jeremy, and Gator discover a filthy, illegal puppy mill in the woods. In one of the cages, Gator spots a small female canine who will win his lifetime love and devotion: “My eyes settled on one golden-red fur ball in an end cage nearest us.” In a hair-raising, action-packed scene, a man from the kennel discovers Gator and tries to kill him until the boys fight him off. Law enforcement agents raid the kennel, and the little dog who has lived her whole life in a cage is named Magnolia and joins Gator and his family. Life is good for several years until an unnamed hurricane hits and the levee breaks. When Gavin and his parents are finally rescued by boat, they are forced to leave Gator and Magnolia behind. This absorbing and moving canine tale should appeal to a middle-grade and YA audience. Cute black-and-white drawings by Lester introduce each chapter. Through Gator’s emotional voice, Weber deftly captures the deep trauma experienced by the many pets displaced by natural disasters in an era when people were not allowed to bring their furry companions into shelters with them. And the poignant lessons Gator learns during his painful journey deliver the narrative’s implicit, positive messages: forgive and keep an open mind about others.

An engaging mix of adventure, anguish, and renewed hope for animal lovers.