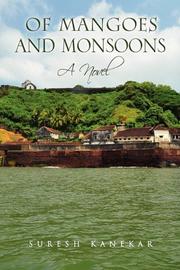 OF MANGOES AND MONSOONS

Kanekar’s debut is both a historical novel of midcentury India and a portrait of the philosopher as a young man.

India freed itself from English colonial rule and became a nation on Aug. 15, 1947. But well into the next decade, pockets of the subcontinent remained under French and Portuguese control. One of these pockets was Goa, a small enclave on the country’s western coast that, during the ’50s, fought covert and overt battles against Portugal in the hopes of throwing off foreign rule. Enter Ramesh Natekar, a young intellectual coming of age during the Goan struggle for independence. He is a student, a thinker and a teacher who studies philosophy and teaches English and history. A thoughtful young man, he reads Marx, Freud, Plato and Spinoza in an effort to mold his mind. But he is also a budding revolutionary who believes that Goa has struggled for too long under Western domination and deserves to take its rightful place as part of the new India. Though Ramesh, like Gandhi, is devoted to nonviolent resistance, he is arrested for his involvement with freedom protesters and jailed. The novel follows Ramesh’s principled fight for Goan self-determination. But into this tale of political intrigue, the author weaves stories from Ramesh’s youth and adolescence, and the novel is as much about personal growth as it is about political intrigue. Steamy cutaways to Ramesh’s romantic intrigues—including one with an upper-caste woman who is his true love—spice up the narrative. As Kanekar adds detail and depth to his protagonist’s portrait, Ramesh’s own development becomes a metaphor for the maturation of Goa, and Ramesh’s labors and triumphs mirror those of his homeland. Kanekar writes with a sure hand, artfully blending historical analysis, personal narrative and philosophical digression into a satisfying whole.

A fascinating appendix to the struggle for Indian independence