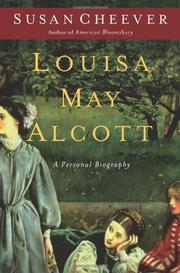 The Life of a Beloved Author and Storyteller

Contextual study of Louisa May Alcott's life (1832–1888) and work, from her childhood among such writers as Emerson, Fuller and Hawthorne, to the astounding literary career that afforded her a feminist independence of spirit even as she remained a caregiver to her family.

In this new biography, Cheever (MFA Program/Bennington Coll; Desire: Where Sex Meets Addiction, 2008, etc.) presents an insightful narrative of Alcott's life and how her experiences informed, but didn't dictate, her fiction. Raised in the culturally rich and progressive community of Concord, Mass., Alcott was an inquisitive and rebellious child who adored her three sisters and idolized her famous literary neighbors, particularly Emerson, who frequently played the role of benefactor to the often destitute family. Alcott’s father was a hopelessly impractical academic and a domineering patriarch; she had a contentious relationship with him for most of her life and famously wrote him out of her classic, Little Women (1868). Despite these hardships, Alcott dreamed of becoming a writer. Amid the outbreak of the Civil War and her youngest sister's tragic death, Alcott wrote copious journal entries, poems and stories; at age 19 she published her first poem. Twelve years later, she joined the Union Army as a nurse in Washington, and the grisly, poignant experience catapulted her into adulthood and was integral to the development of her mature prose. She published a collection of letters she wrote while on duty to great acclaim and returned to Concord a rising literary star. Within five years she would write Little Women and become one of the most celebrated authors of her time, providing young girls with a novel distinguished by relatable story lines and characters, one that armed generations of readers with a sense of what is possible for women. Alcott was able to exemplify her belief that an unmarried woman could be intelligent, successful and, perhaps more importantly, happy. Throughout the narrative, Cheever allows Alcott's complex humanity to reveal itself slowly, drawing the reader into her iconic life.