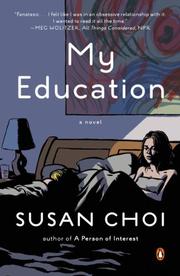 The sexual initiation of a graduate student, who learns how much she does not know, in a novel that somehow feels both overstuffed (style) and undernourished (substance).

From the reference in the first sentence to “a highly conspicuous man,” one of “scandalous, noteworthiness, and exceptional, even sinister, attractiveness,” Choi (A Person of Interest, 2008, etc.) makes it obvious to the reader that the novel’s rites of passage won’t be confining this education to the classroom. Yet what seems inevitable, particularly after the narrator becomes the teaching assistant to the man of such scandalous, sinister attractiveness, turns out to be anything but, as her attraction to her mentor is mere prelude to complications involving the professor’s wife, the professor’s nannies, the narrator’s roommate, and one alcohol-drenched party and another even more drunken happy hour. Throughout, Regina Gottlieb seems as clueless and directionless as she is articulate (or at least verbose; she expresses herself in convoluted sentences and paragraphs that test the reader’s endurance). She thinks and writes (for, ultimately, she becomes a writer) like this: “Even I, who had never before had a female lover; much less one who was married; much less married to my own former mentor; much less a professor herself at the school at which I was a student—even I who, due to all this complicated inexperience...,” and so on. Her orgasms require expressions almost as choppy: “I seemed to come right away, with a hard, popping effervescence, as if her mouth had raised blisters, or an uppermost froth; but beneath, magma still heaved and groaned and was yearning to fling itself into the air.” Flash forward 15 years, when she informs, succinctly, “Reader, I grew up,” and her education has now extended to her own marriage (“an intricate code of reliance”) and middle age (when “the least reconcilable times of one’s life would in fact coexist until death” and “I didn’t live thoughtlessly in my flesh anymore”). Yet her past improbably returns as more than flashbacks, and her education leaves her by the end knowing even less than when she had started.

There seems to be a happy ending here, though it’s hard to be certain for whom.