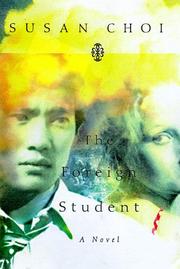 An uneven first novel that elegantly details the love story of two young people, a Korean student and a southern beauty, whose earlier lives have been shaped by war and obsession. Like so many current debut novels, the writing here is stronger than plot or character, but Choi, in giving her male protagonist a Korean background, especially one shaped by a less familiar war—the Korean War—adds a refreshingly unusual dimension to her tale. Set in the mid-1950s, and taking place mostly at Sewanee, the University of the South, the story begins when Chuck Ahn, formerly Chang, meets Katherine Monroe. Now in her late 20’s, Katherine, living at Sewanee in her family’s old summer home, is in love with Charles Addison, an older professor—he was a classmate of her father’s at Sewanee—who seduced her the summer she was 14. Chuck, who recently served as a translator for the American forces, is there on a scholarship. As the year passes, Katherine and Chuck keep meeting by accident in scenes that alternate with their recollections of the past. Katherine recalls how she came to be seduced, and how her obsessive love for Addison has shaped, or perhaps, as one observer suggests, ruined her life. Chuck remembers the privations of the war years; his flight when the communists retook Seoul, and, in an internment camp, his betrayal of someone who’d once helped him—an act that determined him to leave Korea. A surprise proposal of marriage from Addison finally makes Katherine confront her confused feelings. In New Orleans for the summer to be with her dying mother, she invites Chuck to visit. He does, and the two at last accept their pasts, and—in the best tradition, though the affair never crackles with convincing tension—each other. While the love story never seems all that credible or affecting, Choi has tried to write a great sweep of a novel that is both moving and intelligent. The result is deserving of praise, and the author of encouragement.