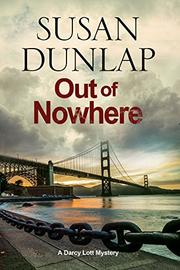 A stunt double and Zen student adds sleuthing to her resume as she asks what might have driven her brother out of town.

In spite of her job as a stunt double, Darcy Lott’s life doesn’t seem all that interesting. Maybe it’s because she’s been absorbing all the mellow energy from her Zen teacher, Leo Garson, or because her long-lost brother, Mike, has finally returned to San Francisco. Whatever the reason, events seem to pick up, even though her interest may not. Darcy discovers that Mike’s twice been sideswiped by a car and is convinced that someone’s after him. After sharing some enigmatic bits of noninformation about whom that might be, Mike disappears, but not before telling Darcy that he can handle it. Darcy, who’s not so convinced, tries to figure out who might want to attack Mike, though she’s working at a disadvantage given her limited knowledge of his life. She’s got help, after a fashion, in the form of some of her siblings, whose descriptions read like career day at a grade school: John the cop, Gary the lawyer, Grace the epidemiologist. Though her siblings want to lend a hand, they don’t have much more insight than Darcy does, and she ultimately has to depend on her own cunning tempered by her Zen take on what Leo might say. Darcy’s investigation is thrown into overdrive when she begins to suspect that her siblings may also be targets. Is the mystery about Mike, or is something bigger afoot?

Dunlap’s creation of occupations for side characters that seem to exist solely to help her heroine (Switchback, 2015, etc.) makes sense given that her writing focuses more on ends and means than enjoying the journey.