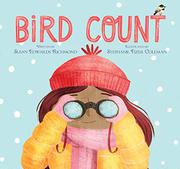 On a snowy winter morning, Ava and her mother bundle up to spend their day driving and walking around through varying habitats to count birds in the area designated to them by their local organizer. This year, Ava’s old enough to take the tally, which, in a clever design feature, runs along the side of each spread. Count guidelines are smoothly worked into Richmond’s narrative: Count every bird you see or hear; make sure at least two people see or hear it; don’t count any bird more than once. She even explains how a tally is marked. The birds, familiar to residents of eastern and central North America, are faithfully shown in context in Coleman’s digital paintings. Ava and her mother have light brown skin, and Ava’s hair is lighter and fluffier than her mother’s straight, black locks; team leader Big Al presents white. The author builds suspense by including Ava’s hope to see a raven again—a bird she saw two years ago but not on last year’s count. The story includes common frustrations: birds only one person sees and birds that were probably counted already. Their final tally—24 species, from great horned owl in the early morning to the longed-for raven at dusk—is quite respectable, and more about each featured species appears in the backmatter.