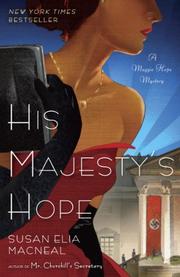 A dangerous trip to Berlin becomes a life-altering experience for a British spy.

Maggie Hope is a Brit raised by an aunt in America who returned to London, where she learned many things about the supposedly dead parents she barely knew. Her father is a scientist working to break German codes, her mother a Nazi agent whom Maggie outwitted in her last adventure (Princess Elizabeth’s Spy, 2012). Now she has undergone rigorous training to be sent to Germany, where her quick wits and excellent German just may let her pull off a dangerous mission. She is parachuted into Germany, where she is posing as the girlfriend of Gottlieb Lerner, a Nazi who is really a devout Catholic involved with local priests working to thwart Nazi plans. Her job: deliver radio crystals and plant a microphone in the home office of her mother, Clara Hess. Maggie meets her half sister Elise, a nurse who has recently discovered that the government is busily carrying out their secret plan of race purification by killing children and others whom they consider defective in any way. Elise is boldly hiding a British pilot and the Jewish husband of a fellow nurse in her mother’s attic while working to find proof of the mass killings. When Maggie gets a chance to work for a Nazi involved in the program, a horrified Lerner tries to get her to return to Britain, but Maggie is determined to get proof that the program exists.

Maggie continues her winning ways with more thrills and romantic problems, but this time, the horrors of her experiences add depth to the already pleasing adventures.