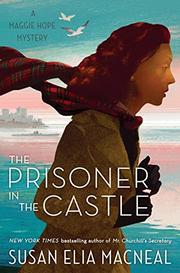 THE PRISONER IN THE CASTLE

Prisoners on a remote Scottish island play cat and mouse with a killer.

Maggie Hope has been everything from Churchill’s secretary to a spy who barely escaped Nazi-occupied Paris (The Paris Spy, 2017, etc.). Now, because the Special Operations Executive deems what she knows too dangerous for her to be back in the field, she’s a prisoner on the Isle of Scarra. Maggie and the other agents exiled there live in a hideous fake Tudor mansion once owned by Sir Marcus Killoch, who reportedly killed 10 of his guests and committed suicide. The prisoners pass the time by fishing, hunting, reading, drinking, and, in Maggie’s case, swimming in the frigid surf and learning Gaelic from Mrs. McNaughton, the cook. Still another amusement is getting murdered. The first to die is Capt. Evans, the commander at Scarra, who’s apparently poisoned. Before Arisaig base can send a boat, another man is found dead, possibly by accident. Back in London, DCI James Durgin, desperate to have Maggie testify in a murder trial, is thwarted by the powers that be. As more of her fellow prisoners are dispatched, Maggie wonders whom to trust, for they’re all trained to kill. She's not cheered to learn more about Sir Marcus’ despicable treatment of the local girls he forced into sadistic sexual games. To raise the stakes even higher, SOE has discovered that someone at Scarra is a German spy sending coded messages to a submarine lurking nearby. When a strong storm prevents anyone from reaching Scarra, it’s up to Maggie to act.

MacNeal uses Christie’s And Then There Were None as a framework for a character-driven mystery/thriller that successfully emulates the original.