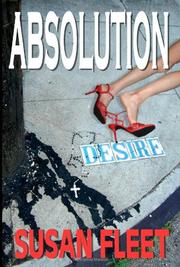 A cop hunts a serial killer in New Orleans.

In spite of his checkered past, Frank Renzi is a good cop. He’s hardworking, conscientious, dedicated, honorable–just the sort of person any city would want out on the streets hunting criminals. But this time Renzi may have met his match in â€œthe sinner.” The serial killer is a Catholic priest, warped by a dark childhood of torture and humiliation at the hands of a cruel nanny, unable to resist a compulsion to inflict his inner pain on innocent women. The sinner commits a series of ritualistic murders he refers to as â€œabsolutions,” which always end with the post-mortem removal of his victim’s tongue. But he covers his tracks thoroughly, leaving the police with few clues. That doesn’t stop Burke Norris, the overbearing and publicity-hungry FBI agent in charge of the investigation, from looking for an African-American suspect. The city’s seething divisions rise to the surface when reporter Rona Jefferson insists the search for a black suspect is racially motivated. For reasons of her own, she repeatedly and confrontationally uses her column to urge the police to look for a white priest, putting the Catholic community on edge. Into these treacherous waters steps Renzi, a dedicated cop with dark secrets in his past. Throw in a twisted serial killer who suffered psycho-sexual abuse as a child, opportunistic reporters and cops more interested in advancing their own agendas than getting to the truth for a clichÃ©d plot line and stereotyped characters. Even the librarian in this book is a woman in her 60s who wears â€œgranny glasses” and keeps her hair in a bun, straight out of central casting. But the book manages to hold its own even in this crowded genre, thanks to its relentless tempo and Fleet’s sharp writing.

Tight pacing and no-nonsense prose save an otherwise cookie-cutter thriller.