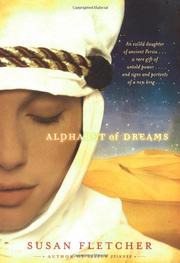 Fletcher’s inward-looking tale recreates the arduous journey of the Three Wise Men, as seen by a teenager in double disguise. After three years of hiding from the Persian king’s soldiers by pretending to be both a boy and a beggar, Mitra, child of a rebellious noble, is swept up by the Magi along with her little brother Babak, who has begun to experience dreams that actually become reality. Impelled by the strange triple conjunction of two planets in the sky, the priests journey across the harsh desert toward distant Jerusalem. On the way, Mitra’s dream of being restored to her previous lofty state runs into one snag after another as Babak’s health begins to fail, the hunt for her and her brother comes closer and her efforts to hide her sex are complicated by new, strange feelings for two young men she encounters. Fletcher focuses more on emotional than physical landscapes, pushing the historical setting well into the background; Mitra gets nary a glimpse of the baby Jesus, and though she’s able to give advance warning of the slaughter of the innocents, that too is left offstage. Still, by the end she has given over her childhood, along with its fantasies, and found a true home. Absorbing. (author’s essay) (Fiction. YA)